The 7D2D Mod launcher 3.x gives an easier method to play your favourite modifications for 7 Days to Die, while keeping them updated automatically for you. It also gives a simple method to explore and locate new modifications.

The 3.x Release of the Mod Launcher has been re-done fully in Unity, with the purpose of being interoperable with Linux, MacOS, and Windows. Currently, only Linux and Windows is known to operate, whereas MacOS is extremely theoretical today. 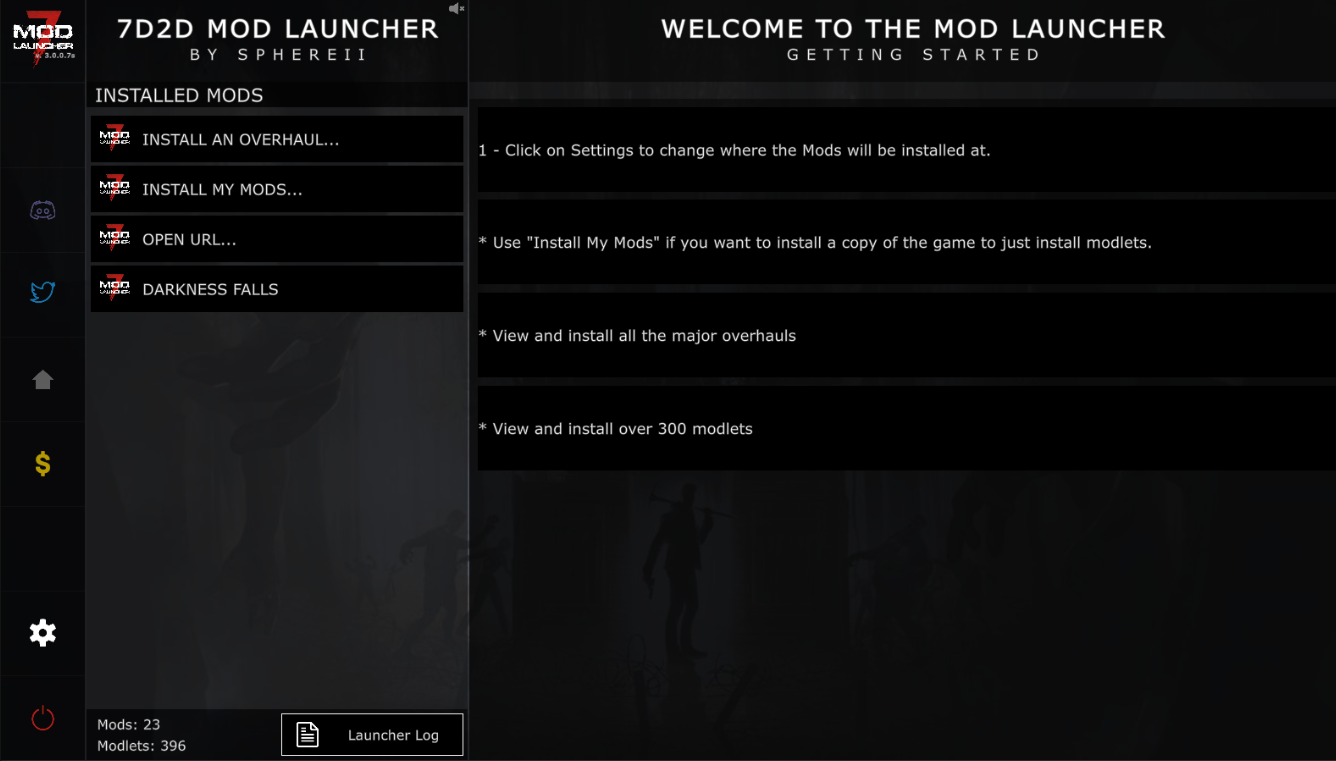 The 7D2D Mod launcher (by SphereII - a modder and developer) provides an effortless way to manage your favourite mods for 7 Days to Die, while keeping them updated automatically for you. Mod launcher also provides an easy way to explore and finds new mods. Mod launcher is essentially software that installs, upgrades, and runs 7D2D mods.

Many of the latest mods are supported, and you can keep it up to date without having to visit the forums.

In addition to certain default mods that you may already be familiar with, the 7D2D Mod Launcher includes a number of Valmar's excellent mods such as Expansion and Overhaul, CHS and Horde, and mods such as A Clockwork Project, Spider's True Survival mod, and TheRedWolf's SteelMod.

Additionally, in addition to playing the individual modifications, you can also play combination mods, which would consist of a standard mod combined with a prefab kit, such as one from stallionsden's Megacity or Magoli's ComoPack, respectively.

Some of the most thrilling and captivating aspects of using this mod launcher are that it separates mod installations (which prevents conflicts with overhauls, automatically updates the launcher, and enables players to even customize overhauls using an integrated modiet management method.

Before attempting to use an overhaul such as Gnamod, Ravenhearst, or War3zuk, players must first install 7D2D Mod Launcher.

A new clean, bare minimum website to help you find exactly what you want, quickly and easily.

to keep playing on your existing version

What does it do, exactly?

to the various mods. When you want to play a mod, you select it from the list, and it will

download and install the mod for you before launching the game.

You can also create your own configuration, known as My Mods, by mixing and matching

mods as you see fit.

If you're playing on a server, your server administrator can create a config for the Launcher

to use that includes all of their required download links. Do you require the back pack mod?

The Server Administrator can include it in their zip file, and everyone will have access to it.

The 7D2D Mod Launcher comes with some default mods that you may already be familiar with,

including Valmar's great mods, including Expansion, Overhaul, CHS, and Horde, as well as

mods such as A Clockwork Project, Spider's True Survival mod, and TheRedWolf's SteelMod.

In addition to playing the individual mods, you can also play combination mods, which would be

Automatically updates to the most recent versions of the mods from the servers you've chosen.

Sets the server address in your Connect to Server window automatically.

The 7D2D Launcher provides a single file configuration that lets you specify your download links,

website, and other information. By providing that file to your players, they will keep up to

date with all your changes that you do, without having to hunt down forum posts.

a single file configuration. By providing that file to your players, they will be able to keep

up with all of your changes without having to search for forum posts.

A straightforward XML file configuration that lists all of your servers and download links.

Use a service provider li to centralize the link.ke Text Uploader.

The 7D2DLauncher will load the new version.

The 7D2D Launcher gives you a larger player base to test your mods on.

community for single player instances. Modders can reach a larger player base and provide

a more consistent format by adhering to the My Mods Standard.

The mod installer will create a new c:\7D2D folder with a clean install of 18.3 for

the DF mod to use. My old Fun Pimps version was likely the problem and I needed

a clean install to refresh something to give me my text back. Just make sure you

have green checkboxes besides the Fun Pimps latest stable and besides

Darkness Falls before you synch the mod and run it.

your game on a regular basis. It is an absolute necessity that you update the items.

You will also receive messages from the game informing you of new updates.

Then, while playing, you must install a mod launcher. This launcher is extremely simple to set up.

To begin, you may encounter some difficulties while downloading. Here is a step-by-step guide to

using and downloading the launcher for your convenience.

The launcher box will include many mods, such as the power mod and the fear steel mod.

So, whether you go with one mod or another is entirely up to you.

Then, before downloading 7 days 2 die launcher, you must create multiple folders.

you can go for an alpha that you are currently playing. Furthermore, it can be an exciting

EAC, on the other hand, is intended for users who are not connected to the internet.

As a result, if you are an offline user, you do not need EAC.

Throughout the process, keep your vanilla folder separate from any existing 7D2D folders.

Copy your launcher into the box, then hit play. As a result, the launching system will be

displayed. CA must be turned off later. Finally, run and save as default.

How to check consistency

Right-click on 7 days to die from the Steam library to open its properties.

Repeat until you succeed.

Start 7D2D Launcher and set the MOD installation destination and 7 days to die to be used as vanilla. What should you do if the mod launcher isn't working?

When it comes to anything, satisfaction is the best thing. If you've been having problems

You should also look into the installation process of the 7D2D launcher.

What if I died 7 days after failing to load the mono mod launcher error message?

This problem could be solved by using the Common Fixes thread. You have to go for it.

7 Days to Die, then click on install 32bit to solve the entire problem.

What happened to the 7 Days to Die mod launcher?

As is obvious, seven D2D include Valmar's fantastic mods, including Expansion,

The Red Wolf's Steel Mod. There is also a default mode and an offline mode.

You are free to choose any of them.

How do I enable mods in XCOM 2?

the name of the mod will appear on an icon in the Mod Manager as a result.

Furthermore, press the red Off button next to the mod's name to turn it on.

The mod will be enabled the next time you launch the game.

How do I install 7D2D Mod Launcher on Windows 7?

To allow TLS, you must install a patch provided by Microsoft.

Get the EasyFix tool.

Even if I start it, it will still be vanilla.

It was not possible to completely initialize Steam: The Steam client is not running or there is no relation

When you start the Steam client and click the Play Mod button in the English version, this error will appear.

Launch Steam and then hit the Play Mod button.

Another great tutorial by Ztensity (or as HTML).

Want to play and use mods? Go ahead and rent a server.